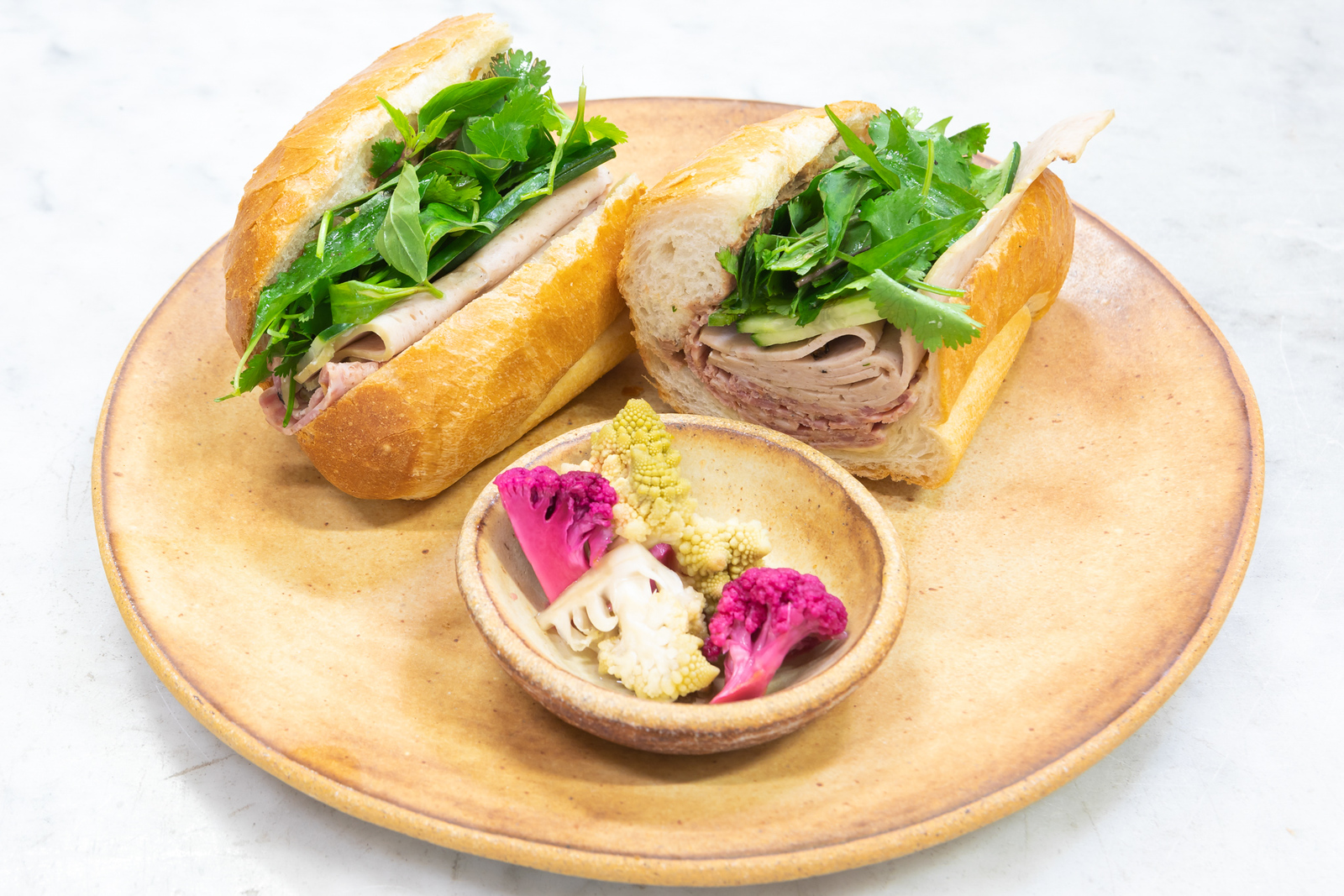 When Charles Phan returned to his homeland of Vietnam in 1992 for the first time since he was a teen, one food item in particular stood out to him: the banh mi. It was all in the bread. The fluffy on the inside yet crisp on the outside texture was like nothing he’d ever experienced in the United States.

This was a few years before the chef would go on to open his legendary San Francisco restaurant, The Slanted Door. But even back in the 1990s, “I always wanted to do a sandwich spot,” said Phan.

Chuck’s Takeaway is situated in the entryway of Phan’s 10,000-square-foot commissary kitchen on Valencia Street, which the Slanted Door team has been cooking out of for the past 13 years. The neighborhood is very familiar to Phan — his family had a sewing business there in the 1980s, he used to go to Mission High School, and the original Slanted Door location was just two blocks down the street.

What was once a storage space has been transformed into a small, friendly spot for ordering sandwiches, house-made spritzers, Vietnamese coffee, tea and cookies. For now, Chuck’s Takeaway is a takeout-only situation, although Phan may add a few tables inside in the future.

To make the former storage space less stark, customers are greeted with a welcoming display of wooden shelves along one wall, filled with Slanted Door-made chile oil, preserved lemons and copies of Phan’s cookbook, “Vietnamese Home Cooking.” Adding a quirky touch in the space are 20 paintings of dogs (by artist Judy North, a friend of Phan’s mother), which Phan plans to rotate out with works from other local artists.

This is not the first time Phan has served sandwiches at one of his restaurants, but he said it’s the first time he’s ever been truly happy with the product. Achieving that holy grail banh mi was not a short process for a perfectionist like Phan. He became obsessed with nailing the bread.

“You just have to get it right,” Phan said. “It doesn’t count if you just put it in an Italian roll. You cannot have Vietnamese on the inside and somebody else on the outside.”

His pursuit of the perfect banh mi roll started to ramp up in 2015, when he traveled to Vietnam to meet with a baker willing to share his bread recipe. Phan watched the process carefully, taking photos and videos of each step. But when he got home, his phone crashed. He had no backups.

“I lost everything,” Phan said.

It wasn’t until 2018, during another trip to Vietnam, that the chef was able to relocate the Vietnamese baker on a whirlwind journey that involved a very fast scooter ride. This time, his phone didn’t crash — but he still had trouble recreating the bread when he returned home to San Francisco.

“You can see this thing, where you know that once you achieve it, it’s going to be amazing,” he explained. “But it’s just the imagination. You actually have to do it, but until you do it, you don’t have anything.”

Recently, Phan finally heard from the baker again — he was in Portland. They met up at the commissary to work on the bread, and together, they modified the recipe until they’d found a variation that worked for the San Francisco climate.

After months of obsessive tweaking with his team, the bread was ready: perfectly chewy on the outside and soft on the inside, just like Phan had always dreamed of.

While the bread at Chuck’s Takeaway is very traditional, the insides of the sandwiches are less so. Chuck’s Takeaway does offer a version of a classic Vietnamese sandwich, the “CP’s No. 3” with pate maison, pork cha and chicken liver pate, but there’s also an Italian braised beef sandwich with salsa verde, a vegetarian sandwich with eggplant, yuba cha and mushroom pate, and an egg salad sandwich on fluffy milk bread.

Phan also serves all six sandwiches on the menu with pickled seasonal vegetables on the side, rather than the more traditional choice to include them inside the sandwich. He plans to rotate the sandwiches out with new creations as he sees fit.

“I didn’t want to just follow traditional sandwich shops I’ve seen in Vietnam,” said Phan. “I’m going to keep the bread very much the same but inside, we have a vegetarian sandwich that’s really fun, the egg salad … this doesn’t even look close to a lot of Vietnamese sandwiches, but I’m hoping on the outside it’s 100% Vietnamese.”

Each sandwich costs $16, a price Phan will not fall over himself trying to convince you of — with every single ingredient made in-house, he knows it’s worth it.

“People are used to getting something cheap, but I had the same situation when I first started Slanted Door,” said Phan. “I just need to convince you once that I give you value. … I don’t try to argue whether or not my sandwich should be a $5 footlong or whatever, I’m not in that genre. We make this every day in-house, we want to pay our farmer well and all the meats are organically sourced.”

And if that doesn’t convince you, just remember this is a sandwich 30 years in the making.

Phan says his long journey to perfect his banh mi is part of a greater trend he’s noticed in the Vietnamese American restaurant scene, in which he says chefs are getting “more focused.”

“You bring a little piece of the world to people and you have to perfect it for it to be fun,” he said. “I love that we have to perfect something before we can introduce it. It’s like perfecting a move at a dance company before you launch your show.”