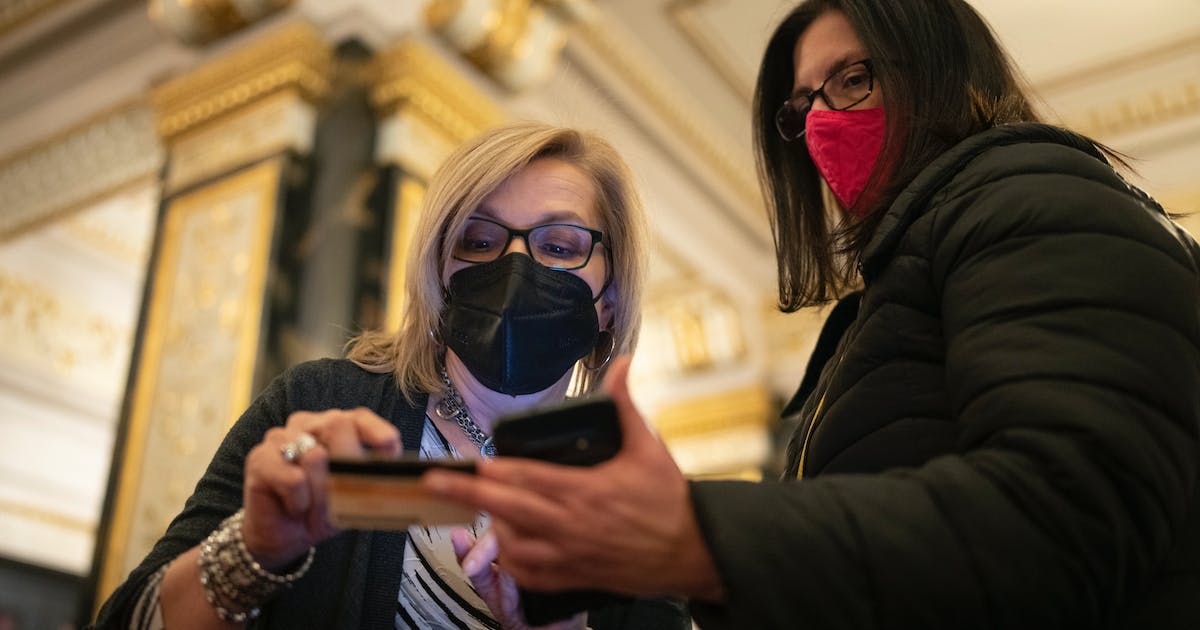 Minneapolis and St. Paul will require customers to show proof of vaccination or a negative COVID-19 test to enter restaurants, bars and other entertainment venues, marking some of the most aggressive steps the Twin Cities have taken to curb the spread of the virus.

The action comes as officials are trying to temper a spike in infections and hospitalizations fueled by the fast-spreading omicron variant, which is causing staffing shortages across industries.

“This is a critical next step to avoid closures,” Minneapolis Mayor Jacob Frey said at a virtual news conference alongside St. Paul Mayor Melvin Carter and other officials. “We want to stay open, and we need to stay safer.”

The new restrictions — which will apply to places where food or beverages are sold for on-site, indoor consumption — will go into effect for most businesses Jan. 19, though ticketed events will not be required to comply until Jan. 26. Patrons can provide either proof of vaccination or proof of a negative COVID-19 test taken under medical supervision within the last 72 hours. Proof of booster shots is not required.

The orders, which both mayors enacted Wednesday with their emergency powers, also apply to stadiums, movie theaters, bowling alleys, convention centers and other venues that serve food or drinks. St. Paul’s mandate will apply only to businesses that are licensed by the city, meaning restaurants that don’t sell alcohol will not have to follow the new regulation.

“We know that the big difference between those early stages of the pandemic and today is that we have more tools in our toolbox than ever before,” Carter said at the news conference. “We’re not helpless against the ongoing impacts of COVID-19.”

Customers will be considered vaccinated two weeks after completing any of the vaccine series approved by the Centers for Disease Control and Prevention (CDC), officials said. They can present businesses with a physical vaccine card, a photo of one or the state’s Docket app as proof.

The measures were announced a week after both mayors reinstated indoor mask mandates. The new orders target dining spots because customers cannot wear masks for protection from the virus while eating or drinking, officials said.

State officials said late last week that the omicron variant accounts for about 68% of current cases in Minnesota. Heidi Ritchie, Minneapolis’ interim health commissioner, said the city’s community transmission rate now exceeds 1,300 cases per 100,000 individuals, putting the city in “the high-risk area category,” according to CDC criteria. Ramsey County falls into the same tier with more than 500 cases per 100,000 residents.

At the news conference, Ritchie said the new regulation primarily aims to boost vaccination rates and keep hospitals from being overwhelmed. “We’re building our wall of immunity in the city and in the state,” she said.

The Twin Cities follow the lead of cities such as New York, San Francisco, Los Angeles, Chicago, Boston and Philadelphia, as well as several countries that implemented similar restrictions this summer to incentivize vaccinations and prevent viral spread.

As she exited St. Paul’s RiverCentre late last week after getting a COVID-19 test, Mary Oo, 28, said she and her husband recently visited New York City and appreciated knowing fellow diners had been vaccinated. But at home, Oo said, she knows many members of the Karen community who still have reservations about getting their shots.

“Maybe this would give them the push to get vaccinated,” she said.

More than three-quarters of Twin Cities residents over the age of 5 have been vaccinated, according to data from Minneapolis and Ramsey County.

Both mayors said businesses of all sizes subject to the new regulations must abide by President Joe Biden’s mandate requiring employees to get vaccinated or regularly tested.

Minnesota Gov. Tim Walz said last year he did not intend to adopt a statewide vaccine passport system, though state employees must be vaccinated or tested weekly.

After Carter announced a more stringent vaccine mandate for city employees in the fall, three unions filed a lawsuit seeking a regular testing option. A judge ordered the city to hold off on enforcing the mandate, which was supposed to take effect Dec. 31, while litigation continues.

A small number of restaurants and certain Twin Cities venues, including First Avenue, the Orpheum, State and Pantages theaters and the Ordway Center for the Performing Arts have required proof of vaccine or a recent negative COVID-19 test for months.

Officials said they tried to coordinate the Minneapolis and St. Paul mandates to minimize confusion, but there are some differences. St. Paul’s order says patrons 18 or older must show identification with proof of their vaccination or test, unlike Minneapolis.

Additionally, Minneapolis exempts children under 2 years old but requires those between 2 and 5 — who are not yet eligible to receive their shots — to comply with the testing requirement. St. Paul exempts anyone younger than 5.

St. Paul’s order will expire in 40 days, at which point Carter said the city will re-evaluate. Frey didn’t specify an end date but said he expects the requirements to be temporary.

Frey said Minneapolis’ regulation will be enforced mostly based on complaints to the city’s 311 system. Violations could result in warning letters, administrative citations, civil penalties or misdemeanor prosecution, but officials stressed that their focus will be to educate and work with businesses.

Both mayors made a plug for their cities’ restaurants, which they acknowledged have suffered some of the hardest economic hits from the pandemic. Industry groups representing restaurants and bars, including Hospitality Minnesota and the Minnesota Licensed Beverage Association, issued statements opposing the mayors’ decisions, saying they are an added hardship for already struggling businesses.

“Once again, the burden is being placed on businesses to enforce this additional mandate, putting them at a further competitive disadvantage and in a difficult position with the public and their frontline workers,” Liz Rammer, president and CEO of Hospitality Minnesota, wrote.

At the Nicollet Diner in Minneapolis, owner Sam Turner recently closed indoor dining and temporarily switched to offering only delivery and pickup after several staff members tested positive for COVID-19. The government mandate “just makes it a lot easier for us,” he said. “You don’t have to look like the bad guy.”

But Abdishakur Elmi, owner of Hamdi restaurant in Minneapolis, said while he believes a vaccine mandate is important from a public health perspective, he also recognizes that many of his customers are wary.

“This is very hard,” he said. “It will discourage people from coming to our restaurant.”