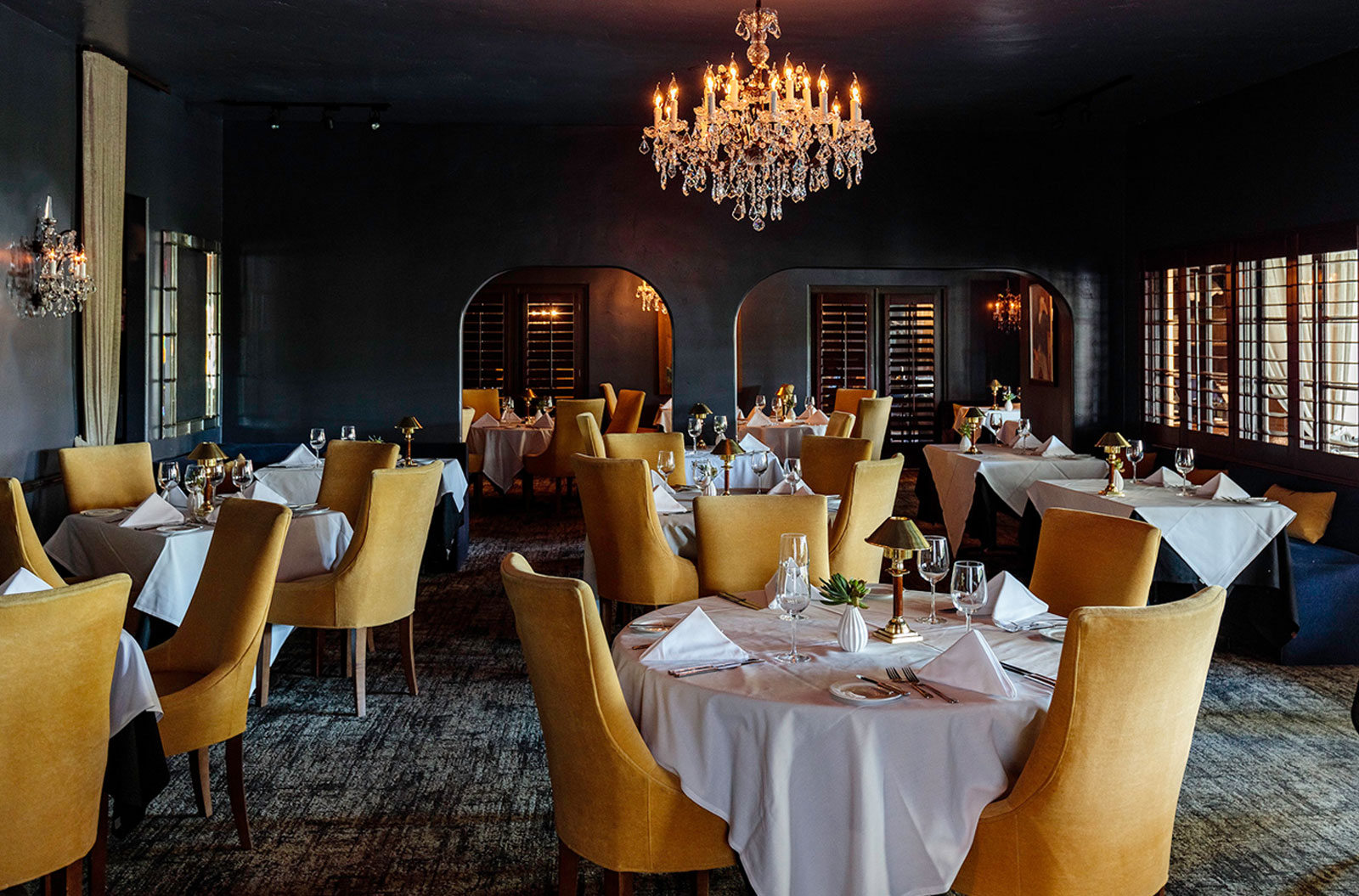 I’m sitting at a table in a swanky restaurant, tucked into a corner booth, sipping a dirty martini when all of a sudden, a burst of flame flies up at my table.

But it’s OK. I ordered the steak Diane, tempted in part by watching (and smelling) servers flambe the sauce, mostly made of cognac, garlic and mushrooms, table-side for other diners. When it’s my turn, people at nearby tables watch the show and likely decide to try it for themselves, judging by how many other orders I saw prepared in the dining room that night.

I was at Melvyn’s at Ingleside Inn, a mainstay in Palm Springs that’s been serving up steakhouse classics for decades. There was another diner who used to order the steak Diane at Melvyn’s, with a Jack Daniels-and-water on the side: Frank Sinatra. He loved the restaurant so much that Table 13, just by the door, was always ready for the crooner if he stopped by for a bite.

“He loved that because he could sit there in the corner booth, look out over everybody and be the first thing you saw when you got into the restaurant,” he added.

Melvyn’s opened in 1975, when Mel Haber bought a once-grand desert estate and rehabbed it into an inn and restaurant. It’s easily one of the best restaurants in Palm Springs, not just because of the high-end fare, but because the place exudes glamour. It’s the kind of restaurant where servers wear tuxedos and there is throwback ambience in spades, especially in the black-and-white photos covering the walls of the lounge area, of Mel posing with dozens upon dozens of the celebrities who came in. He died in 2016, but the place, I’m told, feels much the same as it always did — though there’s now a tribute to Haber every diner walks past on their way into the restaurant.

If it weren’t for the smartphone in my hand capturing the blazing steak before me, the scene could have just as easily been from four decades ago.

And that’s exactly the way I wanted it.

If you’re looking for Frank Sinatra in Palm Springs, it isn’t hard to find him — well, to find his memory, anyway. He wasn’t the first celebrity to take haven in the Sonoran Desert, specifically in the Movie Colony neighborhood that housed stars like Cary Grant and Marilyn Monroe between the 1930s and 1960s, but he is memorialized for bringing a certain allure to the area that it didn’t previously have.

Sinatra lived primarily in Palm Springs for decades, and his presence feels like it’s everywhere. He’s buried close by in Cathedral City, and he has a star on the Palm Springs Walk of Stars to match his star in Hollywood. Twin Palms, the first house Sinatra bought in Palm Springs, in 1947, is a living tribute to his memory. He was so committed to living in the desert, the story goes, that he would helicopter in to work at Warner Bros. Studio in Burbank. The studio had to clear a parking lot for him to land in, which is still called “the landing pad” today.

Frank didn’t dine at Melvyn’s every day — the singer made the rounds in Palm Springs — but his mother Dolly Sinatra did, sitting at the same table at 5 p.m. and charging her son’s tab. In fact, the LA Times wrote, she had dinner there just a few hours before she died in a plane crash en route to see her son perform in Las Vegas.

He dined at the restaurant so often, though, that the maitre d’ had glass panels installed in the front door. “He wanted to have the door open for [Sinatra] every time he entered,” Shough said. “So the maitre d’ would, when they knew he was coming, stand there looking out the glass window to make sure they had the door open the minute that he arrived.” That story came courtesy of Danny Ruiz, Shough explained, who started 45 years ago as Haber’s driver and now works at the front desk. Ruiz is one of many longtime employees of the hotel; some of the servers have been dropping that steak Diane table-side for four decades or more. So you can imagine that it was very, very good. So good — and such a delightful tableside spectacle — that I did it all over again for dessert with the flaming cherries jubilee.

Another anecdote from Ruiz: “Danny told me that he always gave a hundred dollar bill,” as a tip, Shough said. “One time he asked the valet, ‘What’s the biggest tip you’ve ever gotten?’ And the valet said $100. Mr. Sinatra said, ‘What cheap bastard gave you that $100?’ And the valet said he did, so he gave him another $100. You can hear him saying that, right?”

After dinner, I sat at the bar for a cocktail, only to be served my classic sidecar on a cocktail napkin with a likeness of young Sinatra smiling up at me. But, I asked the bartender, if he loved this place so much, why isn’t Sinatra in any of the photos?

“He wouldn’t take a photo with Mel,” the bartender said. Sinatra famously hated posing for photos, but there is one in the restaurant of the two of them. Just above the bar is a photo of Frank in side profile talking to someone, with Mel Haber standing between the two men and grinning at the camera. He was so fed up with not being able to get a photo with the most famous fan of his restaurant, the bartender explained, that Haber had a photographer standing by for the exact right moment when the restaurateur could dash into the frame and get a shot of them together.

“It was,” the bartender said, “the world’s first photobomb.”