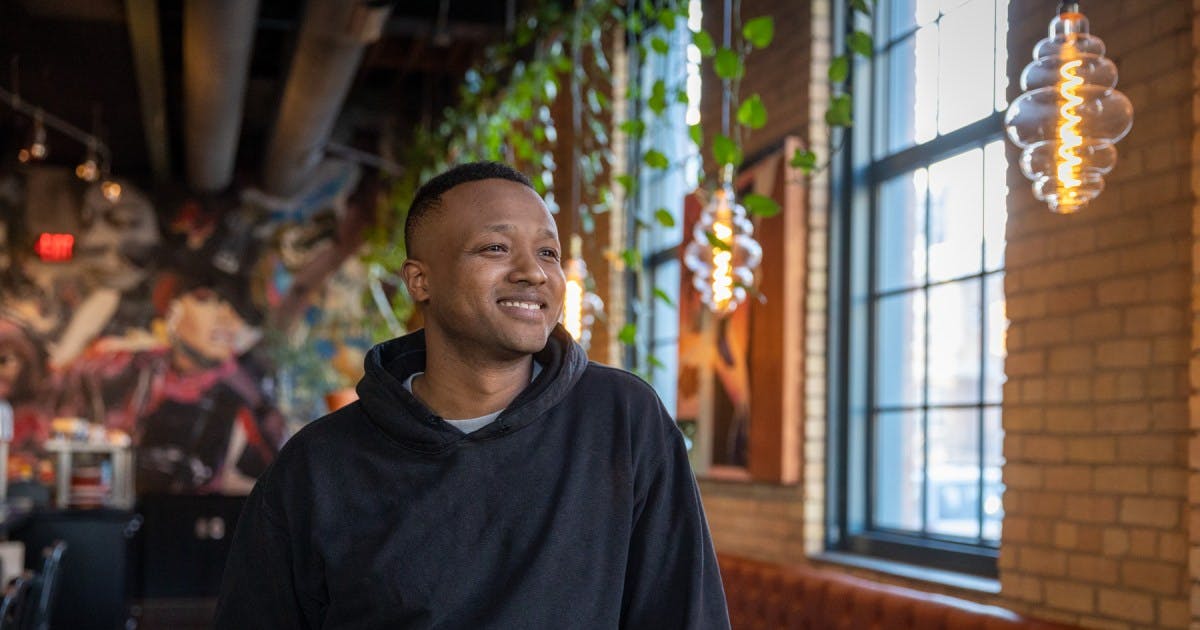 Kamal Mohamed was 10 years old, gazing out the window of his family’s new high-rise apartment in the East African immigrant enclave of Minneapolis’ Cedar Riverside neighborhood. He had never seen so many lights.

“I thought: ‘Truly anything and everything is possible.'”

As he looks around StepChld, his nearly year-old restaurant in northeast Minneapolis, opened during the height of the global pandemic, the awe he felt as a child is still intact.

“This has exceeded my imagination,” he said. “And I have a wild imagination.”

When approached to turn the space at 24 University Av. NE. into a restaurant, Mohamed barely halted at the obvious challenge: He had never worked in the restaurant industry before.

A hiring manager at General Mills gave him this feedback: “We’re the Navy, and you’re that man who wants to be on a fast boat.”

Mohamed thinks that guidance may have been right.

He started the Uptown Food Truck Festival, eventually so successful that he sold the brand. So, he decided to try his luck in San Francisco, taking his senior project invention — JuiceBot, the world’s first robotic fresh juice dispenser — on the startup road.

Mohamed said one of his partners picked up Twitter founder Jack Dorsey in his Uber and pitched the idea. Soon, a JuiceBot was in a cafeteria at Amazon, he said.

But eventually, Mohamed needed to be closer to family in Minnesota. He sold JuiceBot, and the chance to open a restaurant arrived.

Mohamed believes he can apply the same “disruptive model” of JuiceBot to the restaurant world.

StepChld runs on a “flat hierarchy.” There are no chefs. Mohamed thinks of a dish, brings it to the team, and they collectively tweak it and work it out until they land on something. While he’s bringing subtle Ethiopian stylings to the table — mitmita-spiced aioli on the burger, berbere in the birria, wagyu and sugo meatballs—everybody gets to chime in.

When veteran server Laney Dunn started working at StepChld, she told Mohamed that a lot of people in the restaurant industry are toxic.

Mohamed and his team aim to take such notions and invert them.

At StepChld, the proof is in the positive attitude and good vibes, easily felt in the bold, Ethiopian-around-the-edges menu, and in the diverse crowd.

“There is something very experimental about this restaurant,” Mohamed said.

“Everyone should feel respected and heard,” he said. “If that’s not going to be the case, I don’t want a restaurant.”

That’s the ethos from which everything flows at StepChld.

Brian Bogan, Mohamed’s childhood mentor at the Brian Coyle Center, said that the young man was as much a mentor to him.

“When all the kids were acting up, Kamal was not,” he said. “In school he started a competition of who can get the highest grade … His heart is in the right place. The man is destined for greatness. I love him.”

The restaurant tells its own story. There’s no “i” in the name, because Mohamed said no one person makes something good. But “Stepchld” also serves to remind the restaurant’s team and its diners that they should take nothing for granted.

“It’s never the origin you think it is,” Mohamed said of his dishes, recalling a trip to Italy and seeing pasta with sugo on the menu, a dish common in Ethiopia.

“I said, ‘How do you have sugo?’ And the man politely explained to me that his country almost colonized Ethiopia,” he said.

While Mohamed knows that such melding abounds in food culture, he remains inspired and energized by it.

“It’s familiar, but borrowed,” he said. “You have to respect where it came from, but the more adoption there is of something, the more it will live on. It’s like language. It’s important for survival.”

This story comes to you from Sahan Journal, a nonprofit newsroom dedicated to covering Minnesota’s immigrants and communities of color. Sign up for its free newsletter to receive stories in your inbox.