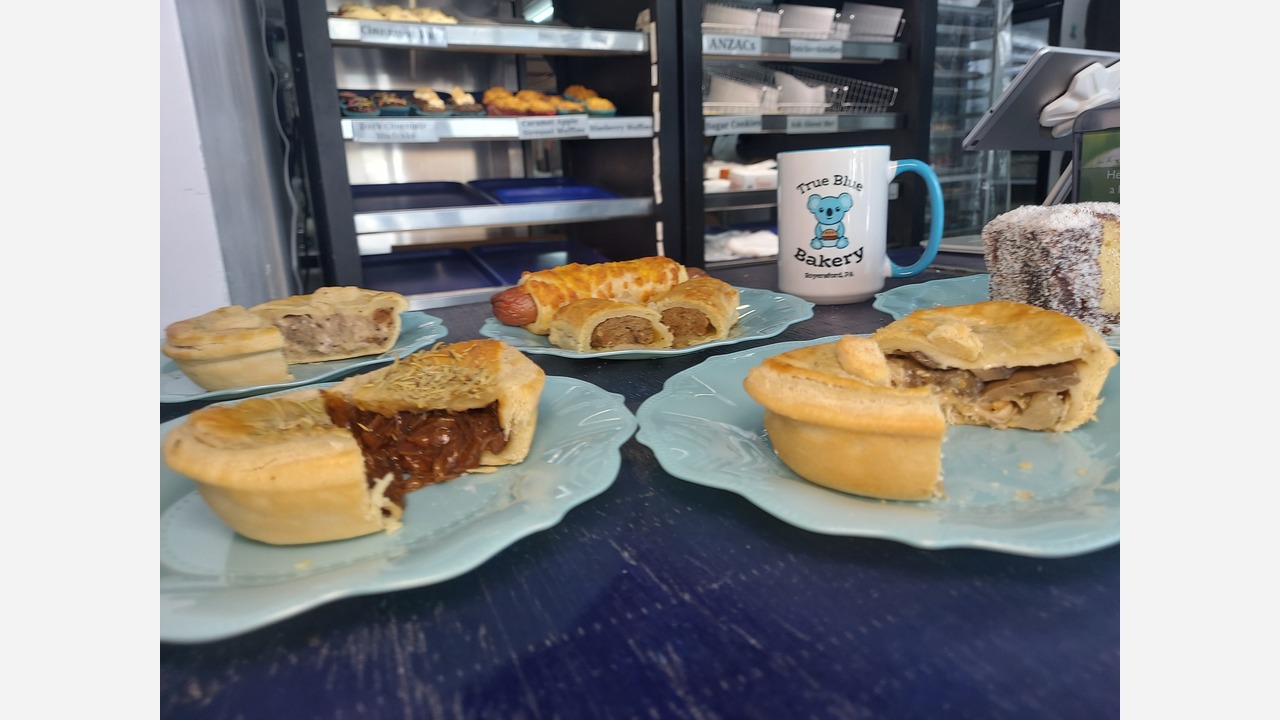 PHILADELPHIA (WPVI) — Hosts TaRhonda Thomas and Alicia Vitarelli make a culinary stop on nearly every continent, tasting the best of the world right here in Philadelphia.

With a lifetime of cooking under her belt, Emma Dalieh came to Philadelphia from Liberia to open Emma’s Liberian Kitchen in Southwest Philly.

Now 10 years later, her second location is spicing up the options in Collingdale — a close suburb in Delaware County.

With Liberian chefs at the helm, Emma’s offers traditional Liberian dishes like ‘cassava leaf’ – the leaves of the cassava plant, simmered for hours in African spices – and ‘palm butter’, a hearty stew filled with smoked meats.

Auntie Emma, as she is affectionately called by her customers, makes it a point to connect with people and considers hospitality a big part of what she offers at her homestyle kitchen.

Nam Vietnamese Kitchen opened in University City in the summer of 2020, right in the heat of the pandemic.

They serve Vietnamese cuisine made fast and with high-quality ingredients.

They opened with hopes of feeding the masses of students and hospital workers once the world emerged from COVID-19.

The most popular dish is the pho. They make the Vietnamese rice noodle soup in a variety of flavors but the classic is beef with bone broth, so tender you can cut the meat with a spoon.

Nguyen came to Philadelphia from DC.

But when COVID hit, he lost his job and moved to Philadelphia where he met his wife, had a baby and found work that taps into his cultural heritage.

His favorite dish is the vermicelli noodles with tamarind marinated and grilled shrimp and lemongrass chicken. He says it reminds him of his mom’s cooking.

They also do a banh mi of the day and the menu is in both English and Vietnamese with proper pronunciations to make it fun and to school people on the proper way to say pho.

No matter how you say it, it’s still delicious.

Roy Cooper and his fiancé, Fiona McPhee, opened True Blue Bakery in the summer of 2020 as a way to reconnect with their Australian roots.

They serve traditional five-inch hand pies made in pie plates straight from the “Down Under”.

The classic is ground beef and onion-filled pie that visitors would find as they travel to Australia.

There is also lamb-filled pie, a southern-style gravy-filled breakfast pie and vegetarian pies such as spinach and feta.

They also serve sweet treats like the Lamington, a favorite dish named after an Australian Lord.

Roy comes from a family of bakers and butchers. Fiona is charged with coming up with new recipes.

The couple hopes the shop can grow into an Australian-style cafe.

Get your authentic Portuguese eats, music & dancing at Café Liz

The next stop on our food world tour takes us to a Philadelphia pillar stirring the pot with authentic Portuguese.

Café Liz, in the city’s Olney section, has been dishing out Portuguese cuisine for the last 20 years.

The most popular dish is the parrillada or the seafood combo platter. It has lobster, clams, mussels, shrimp, vegetables and their special house sauce.

They’re also famous for their homemade chips, a side dish to the bife a Portuguesa, which is their marinated and grilled shell steak.

Sangria is the signature drink.

The marinated grilled quail is a rarity in Philadelphia.

That means a gaucho chef brings 16 different cuts of meat right to your table and it’s served at your desired temperature.

The picanha is their signature cut of steak, which is what the restaurant is named after.

Meats are cooked on two-foot-long skewers at 800 degrees.

Indulging is encouraged and pacing yourself is key, as you’re guaranteed to taste authentic flavors of Brazil.

The market table buffet is also included in the all-you-can-eat experience, featuring everything from seafood to fresh salads and lots of sides.

Family-owned and operated, it all started with Amabilis Silva, who came to America from Brazil in 1997.

Picanha opened in Northeast Philadelphia in 2005 and now has two other locations in Center City and Nyack, New York

A quarter-century later, she has plans to pass the legacy along to her five grandchildren.

The all-you-can-eat rodizio experience is $39 for lunch and $49 for dinner.

You can also choose what you want to eat and pay by the pound.

A network of gardens in West Kensington is at the core of the non-profit Norris Square Neighborhood Project.

Coming up on 50 years of service to the community, the organization provides an oasis in the heart of the city and celebrates Puerto Rican culture.

They have a farmers market every Saturday, with many of the offerings grown in the gardens.

Their Youth Program offers opportunities for high schoolers to learn about the gardens and participate in activities – both at their headquarters, and on field trips around the city.

Neighbors and volunteers of all ages cultivate the gardens, and staffers work tirelessly to keep a multitude of programs running.

Atlantic City is known for its casinos, but there is much more to experience at the Jersey Shore hotspot.

The Atlantic City Tiki Boat is celebrating its first season with cruises taking guests through the calm waters of the back bay.

Enjoy the beautiful scenes in a customizable trip that includes a bartender, music and decorations of your choosing. Guests can also enjoy sunset and moonlight cruises.

The casino’s carousel bar is spinning guests at a very leisurely pace but offering a new look with a unique experience.

As you spin around you can enjoy different views and boardwalk-themed cocktails such as a Funnel Cake Espresso Martini, served with a mini funnel cake, or the Merry-Go-Round, a cocktail poured over cotton candy.

Hard Rock Atlantic City is known for its year-round schedule of A-list entertainment but they have upped the game with the Van Goh Immersive Experience.

Guests can learn all about the Dutch painter while experiencing his work in a 360-degree digital walk-through exhibit.

This Pennsylvania farm hosts Goat Yoga for a good cause!

Rose Bridge Farm in Ambler is a sanctuary for all kinds of rescue animals, including sheep, goats, horses and chickens.

According to the farm staff, by rescuing the animals, they give them a second chance at life.

Throughout the summer, the farm partners with horse and goat yoga instructors to hold goat yoga classes.

A majority of the proceeds benefit the farm and helps with the adoptions of these animals.

Shakespeare in Clark Park returns with two shows in July

Clark Park will play host to a Shakespeare classic, and an update to it later this month.

“‘Taming of the Shrew,’ it’s one of Shakespeare’s funniest, most raucous comedies,’ says director Kathryn Macmillan. “Two unlikely lovers, Katarina or Kate and Petruchio, come together with a very unlikely courtship.”

Act 2 will be under the direction of Ang Bey.

“‘The Tamer Tamed’ is a contemporary response play to ‘The Taming of the Shrew,'” says Bey.

“Shakespeare in Clark Park is one of the great traditions of a Philadelphia summer,” says Macmillan.

The show takes place in ‘the bowl’ among Clark Park’s nine-acres.

“John Fletcher’s play, ‘The Tamer Tamed,’ was written a generation after Shakespeare’s,” says Macmillan, “The world explodes into music and chaos and color.”

And the play revisits debates around gender liberation.

“Kate is the shrew, which in the modern world certainly has some problems with that,” says Macmillan.

“Learn all the ways that people might change or stay the same,” says Macmillan.

Tickets are free and donations are accepted.

Monday, Tuesday and Wednesday mornings, Sister Cities Park offers free family-friendly programming, in partnership with cultural museums along the Parkway. Kids can cool off on the splash pad and in the pond and climb the Wissahickon-inspired rocks.

The park is managed by Center City District, which also operates Dilworth Park at City Hall.

Those spaceship looking domes that have popped up at Eakins Oval’s Oval XP are 360-degree virtual reality experiences. The smaller dome focuses on wellness and family-friendly learning….the larger dome has acrobatics, dance, art, landscape and music including Dead In The Dome: The music and art of Jerry Garcia.

Some of the experiences are free.

Doggie style on Spruce street got a new soft serve ice cream machine. So along with shopping for toys, food and accessories, your pup can get a refreshing scoop, and the ice cream is free on weekends.