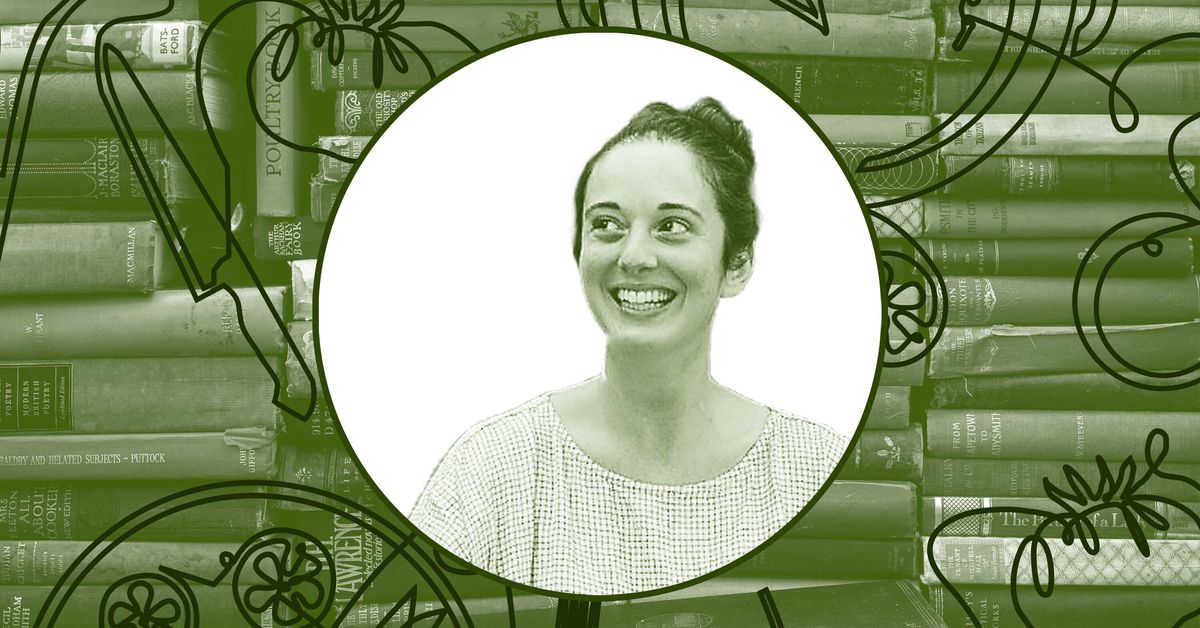 In How I Got My Job, folks from across the food and restaurant industry answer Eater’s questions about, well, how they got their job. Today’s installment: Ali Slagle.

We’ve all been there: Standing at the open fridge, staring at its contents, and trying to figure out what to cook that’s quick, easy, and delicious. That’s where Ali Slagle comes in. The recipe developer is known for her low-effort, high-reward recipes that make preparing weeknight dinner a joyful endeavor. In fact, her contributions to the New York Times, Bon Appétit, and the Washington Post have set the stage for her debut spring-release cookbook entirely dedicated to fast, flexible evening meals.

I Dream of Dinner (so You Don’t Have To) is a culmination of a food media career that began with a series of fortunate events. While working at an independent bookstore in college, Slagle asked her boss for any publishing industry connections in the Bay Area. That single inquiry landed her a sales and marketing internship at Ten Speed Press that turned into a full-time editorial assistant position after graduation, which led to a three-year tenure at Food52 that prepared her for the freelance life she leads now.

From recipe testing and food styling to developing original recipes for the most respected publications in the country, Slagle seemingly does it all — including traveling around the country in an old Japanese van. In the following interview, she discusses learning by observing, having a point of view, and living with perpetual imposter syndrome no matter what successes you may achieve.

Eater: Did you go to culinary school or college?

Ali Slagle: I wanted to work in a field that’d in some way help people with basic human needs, like access to shelter, food, and mental and other health resources, so I planned to study public health. It turned out that it was really hard to get into the public health program at my college, so I pivoted, though I hope my work in some small way is still fulfilling that goal. Instead, I decided to pick my major based on which courses sounded coolest, so I majored in geography and minored in Chinese at UC Berkeley.

While it may not seem like my major had anything to do with my future work, it did impact how I think. Social geography looks at the relationship between people and place. When I’m developing a recipe, I ask myself a billion questions, including: What’s the most efficient way to move around a kitchen to execute this dish? How is this technique or ingredient combination found around the world? What resources (ingredients, equipment, time, budget, effort) is this recipe expending and is it a worthwhile use of them? What’s the blueprint of this recipe that people can adapt to suit their needs?

My “culinary school” was watching my mom cook dinner while I sat at the kitchen table doing homework and reading all her cookbooks. I feel like I’ve had hundreds of cooking teachers — my family, cookbooks, cooking shows — instead of the handful I might’ve had at an official school.

What was your first job? What did it involve?

The moment I passed my driving test, I started pestering an independent bookstore to hire me. They eventually gave me a job once they realized I was never going to leave them alone. It was a small bookstore specializing in travel guides, so I’d stock shelves and recommend books to people going on trips. It could be pretty slow at times, which was bad for business but great for me. I’d spend a lot of time on the couch reading about the world.

How did you get into the food industry?

Working at the bookstore, I became interested in how all these books were made, so I asked my boss if she knew of any publishers in the Bay Area I could intern for during college, and, in the luckiest of lucks, she knew someone at Ten Speed Press, a publisher that specialized in — the next stroke of luck — cookbooks.

I interned for them all through college and then took a job there when I graduated. I edited Food52’s Genius Recipes and got to know the book’s spunky and deeply talented author, Kristen Miglore. She was someone I knew would teach me so much if I could be in her orbit.

After that book wrapped, Food52 was doing a big round of hiring, so I applied to be an editor there and got the job. As an editor at the small-at-the-time start-up, I had a million different jobs and worked with so many people; those few years gave me the network and know-how to eventually take the leap to freelance.

What was the biggest challenge you faced when you were starting out in the industry?

A perpetual challenge, even now, is feeling like I qualify or have the skills for a job. There’s no bar exam for recipe developing, nor is there even a clear path to get into it. I didn’t go to culinary school and have never worked in a restaurant kitchen; “I love food” does not make a good resume. So how do you explain to someone — including yourself — you’re qualified? I still don’t have a good answer. Lies? Trickery? Just kidding?

When was the first time you felt successful?

The first time someone recommended a recipe to me they didn’t realize was mine.

What does your job involve? What’s your favorite part about it?

Jobs, plural, you mean? Being a freelancer is being an octopus.

1. Recipe development: Create my own recipes with a focus on low effort and high reward.
2. Recipe testing: Cook other people’s recipes to make sure they deliver on their promise.
3. Styling: Mostly passion projects that come along, like friends’ cookbooks.
4. Writing: Articles for web and print.
5. Cookbook author: Which includes numbers 1 through 4 and so much more. I Dream of Dinner (so You Don’t Have To) comes out April 12, please and thank you.
6. Literally anything anyone thinks I’m qualified for and wants to pay me for.

All of these things require a lot of schlepping, thinking, receipts, invoices, and emails, but otherwise they each scratch a different itch.

How did the pandemic affect your career?

Most of my income used to come from food and prop styling. Recipe development was where my heart was, but it did not pay the bills. The pandemic paused most of my styling work, and with that one of the main reasons I needed to be in New York went poof. My boyfriend’s job went remote, so we realized we could kind of live anywhere and still do our jobs.

Cut to: Last summer we gave up our apartment in Brooklyn and squeezed our life into an old Japanese van that my boyfriend converted into a camper with a couch, bed, makeshift kitchen, etc. We’ve been traveling around the country since September, stopping every so often at Airbnbs or friends’ houses so I have a bigger kitchen to work from.

It’s forced me to lean on remote-friendly sources of income, so I’ve been doing more recipe testing. But by living in different houses in different cities and towns, I’ve learned so much about grocery shopping, what equipment people usually stock, stove strengths, kitchen layouts — all this will undoubtedly affect recipes I develop going forward.

What would surprise people about your job?

You will make more food than you can eat and you must have a plan for getting it out of the house. I cook around five recipes a day. Every day. Sometimes the same recipe more than once. Community fridges have been lifesavers; I hope more cities get them and the current fridges stay forever.

Do you have, or did you ever have, a mentor in your field?

I owe it all to certain women, like Yossy Arefi, Michele Crim, Kristen Miglore, Christine Muhlke, and Sam Seneviratne, who taught, challenged, and generally looked after me, but they also just let me be around them. You can learn a lot by observing other people do their jobs and listening to their conversations. Creepy, totally, but it meant that even if I hadn’t done the thing before — styled a cupcake, pitched a story idea, interviewed a chef — I had seen it happen and could impersonate it as best as I could when I needed to.

What’s the best piece of career advice you’ve been given?

The founder of Food52, Amanda Hesser, was adamant about having a point of view, which I think about often. Yes, this is another freaking chicken thigh recipe, so how is it different from the others and why does it need to exist? Same with my cookbook — like, do we really need another dinner cookbook? $29.99 is more than fits in most piggy banks, and you can get a billion recipes for free online. I was obsessive about making sure my cookbook would truly help people and bring a little joy to their lives.

What advice would you give someone who wants your job?

Priya Krishna shared an email Francis Lam sent her that is invaluable (her website also has a ton of great resources). See the email a few slides in, here. Francis said it perfectly, but to think of it another way, when you’re spacing out at a job you’re not into, what do the days in your daydreams look like? I dreamt of being alone in a kitchen with coffee and quiet (hi, fellow shy people). I would be in charge of when and where I worked. I would do a little computer work, write sometimes, but mostly I’d just be lost in my ingredients and thoughts. Then I figured out what job(s) would allow me to do that.

Morgan Goldberg is a freelance writer based in Los Angeles.
Photo of Ali Slagle by Mark Weinberg

The freshest news from the food world every day